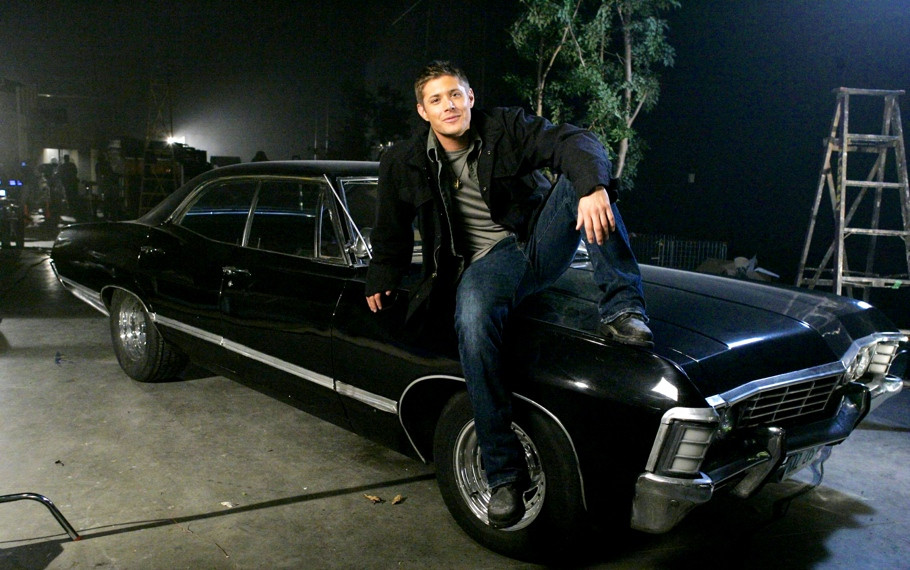 The “Supernatural” Car, the “Zebra Three” and Other Famous Cars in Fiction

Cars and other autos can be important facets of televisions shows, movies and other franchises. Some famous vehicles in fiction are so popular you may be tempted to copy their modifications on your own. Or you could scour the markets for their exact make and model. Have you ever wondered what it would be like to drive the “Supernatural” car just like Sam and Dean? Or do you want to live your childhood dreams and cruise to the mall in Barbie’s car?

However, you may just have a passing familiarity with these popular vehicles in fiction. Maybe you’re just curious about what kind of car was Christine or you’re not familiar what the model of the “Supernatural” car was. You’re in luck because below is a guide to some of these famous cars in fiction, alongside their real-world models and specifications.

The Metallicar aka the Impala aka the “Supernatural” Car 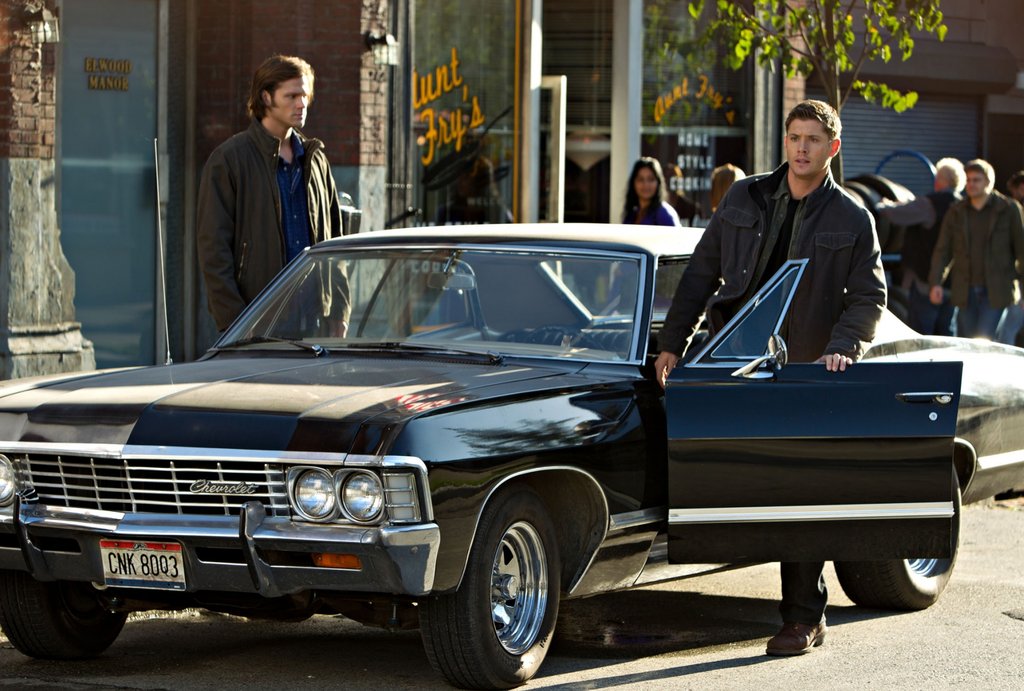 “Supernatural” was one of the longest-running television shows in recent memory. The horror-action-drama series followed the exploits of Sam and Dean Winchester for a whopping fifteen seasons before concluding in late 2020. Aside from the two dashing and rugged lead characters, the show also featured a third protagonist: the “Supernatural” car.

The “Supernatural” car, a beautiful black 1967 Chevrolet Impala, originally belongs to the protagonists’ father, John Winchester. Thanks to some confusing angel-induced time travel shenanigans, Dean Winchester himself, future custodian of the Impala, convinces his own father to buy the incredibly macho muscle car.

The Impala, non-canonically dubbed the “Metallicar” by the show’s fans, has appeared in almost as many episodes as the lead characters. It’s been a point-of-view character in one episode. In another, a trickster once merged Sam Winchester’s consciousness into the “Supernatural” car, in a sick parody of Kit from “Knight Rider.”

The car is so important to the show that its well-being and relatively rare model were crucial plot elements in several episodes. Most notably, the sibling’s enemies used the rare status of the Chevvy Impala to locate them. This made it necessary for the Winchesters to stash the beloved “Supernatural” car in favor of various replacements throughout the season. Needless to say, Dean was not pleased at the loss of the Metallicar.

The 1967 Chevrolet Impala is a beautiful car on its own. It’s a 2-door coupe with a powerful front engine hooked up to the rear wheels. Its engine can carry up to 6.5 liters of gas to power its 8-cylinder engine, capable of revving it up to 4,800 rotations per minute. A Chevvy Impala can go from 0 to 6 miles per hour in just a fraction over 9 seconds, an important feature if, like the Winchesters, you’re always on the go or on the run.

The “Supernatural” car really doesn’t have a lot of modifications aside from the cavernous armory the brothers’ installed in the trunk. This weapons locker is capable of holding shotguns, handguns, gasoline cans, axes and whatever weapons the brothers and the plot requires. However, Dean must have been a genius at restoring muscle cars because the Metallicar has been through some rough times. Sam drove it through a house in the first episode alone. 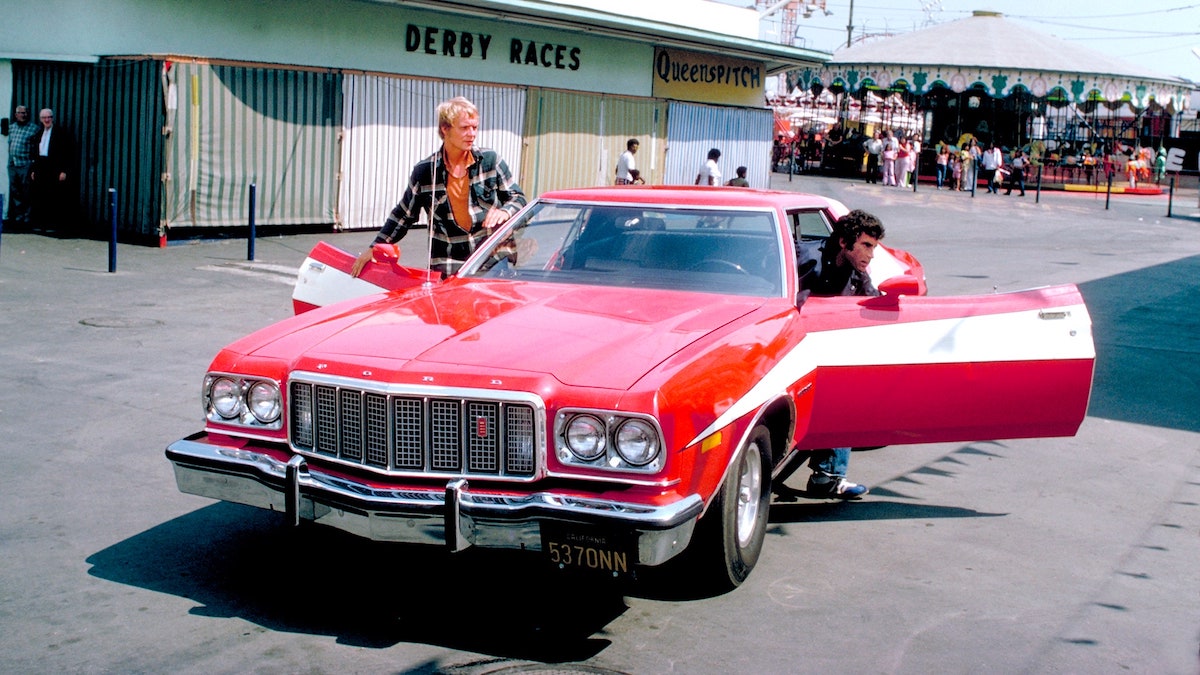 Fictional Bay City detectives David Michael Starsky and Kenneth Hutchinson solved crime and chased down bad guys on the small screen from 1975 and 1979. Although the “Starsky and Hutch” car has been associated with both detectives, the Zebra Three, as it is officially known in the series was actually only owned by Starsky.

The bright red 1976 Gran Torino may seem visually and mechanically impressive to viewers and nostalgic audiences today, but at the time it wasn’t received as well. The “Starsky and Hutch” car was called a striped tomato, thanks to the white vector lines gracing its vibrantly red paint. Most notably, Hutch himself called the car by the moniker in the episode “Snowstorm.” If the rumor mill is to be believed, even one of the leads of the show simply muttered “It’s red” upon first seeing the Zebra Three.

Still, reception over the car improved both for the cast and the audiences as the show continued. Every episode, the “Starsky and Hutch” car would ferry around the most iconic detectives of the 70s, purr into driveways for meetings with Huggy Bear and chasing down criminals. Today, it’s one of the most iconic television vehicles, alongside the “Supernatural” car.

The 1976 Ford Gran Torino used by the production is one of the most coveted cars in American automotive history. Its engines had a 5.8-liter capacity, naturally aspirated and achieving as much as 4,000 rotations per minute. It was also a very heavy machine, weighing in at slightly over 3,800 pounds.

Just like the “Supernatural” car, Detective Starsky’s striped tomato didn’t have much in the way of customization within the series. However, you can try to paint your car the Zebra Three’s distinctive bright red with white vector stripes. The actual cars used in the show’s production had their rear axels and tires changed to make it easier for stunt drivers to maneuver them. However, unless you’re aiming to replicate their high-speed chases, you probably don’t have any need for such modifications. 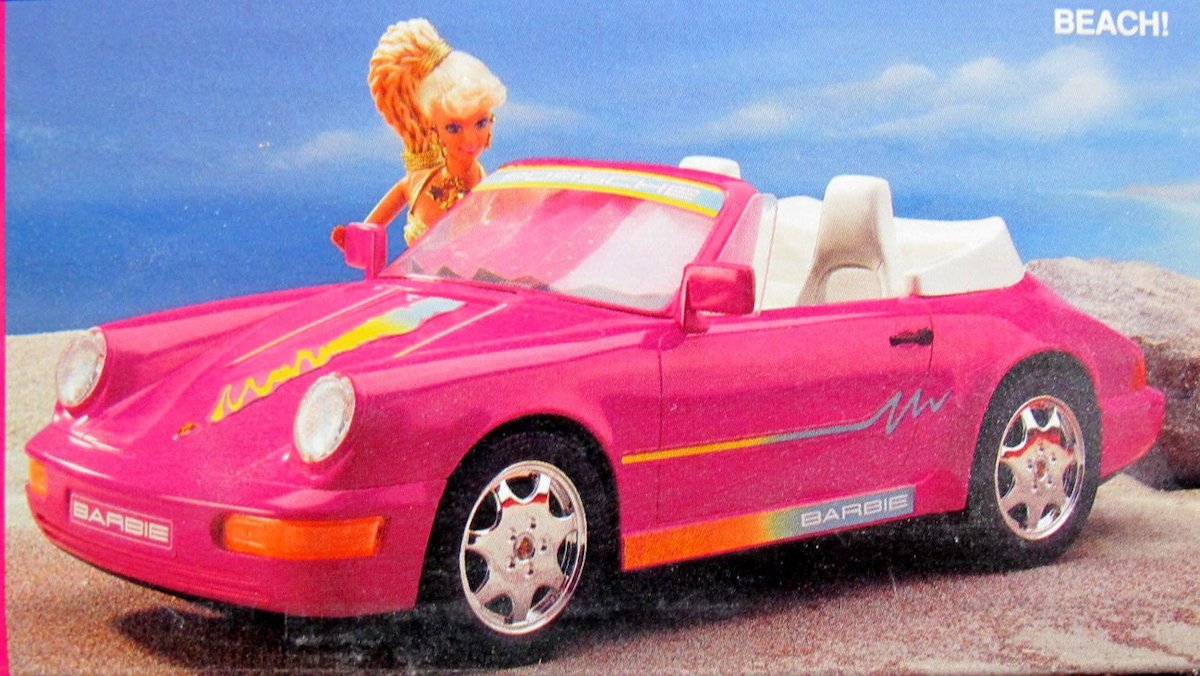 Various, but most famously a 1991 Porsche 911 Carrera Cabriolet

Barbie is supposed to represent the American every-woman, and to better fit into this image, Mattel gave her a car. Although Barbie first stretched her overly long legs in 1959, it wasn’t until 1962 that she started to drive. Since then, Barbie’s car has evolved over the years, matching what the ideal woman is supposed to drive around in.

She’s cruised around on a Jeep. She’s driven her friends around in a hot-pink Kia. Barbie has been a lot of things in her life, but she’s also dabbled in speed racing. In 2004, Barbie’s car was a Formula 1 Ferrari. Barbie sensibly tucked her blonde hair into a pink baseball cap, although she should really be wearing a helmet.

Most famously, Barbie went from every-woman to dream self in the late 80s and 90s. In this iteration, Barbie floored the pedal of a 1991 Porsche 911 Carrera Coupe. The modified car was a convertible by necessity. Of course, it came in a non-standard hot pink, just like almost all of Barbie’s vehicles.

Today, Barbie cruises through town to her dream job and her dream house on whatever Mattel deems to be the best car for her. It won’t take long before she’s getting the keys to a hovercraft or space-capable vehicle.

The 1991 Porsche 911 Carrera Coupe was a beast of a car. With a 5-speed manual transmission engine, a fuel tank that could hold over 20 gallons of fuel, Barbie could achieve 0 to 60 in only 6 seconds. She could drive circles around the “Supernatural” car and still have enough time to pick up Ken and her friends before the Winchesters could catch up.

Barbie’s car changes over the years but they share some features. In order for the dolls to fit into the cars easily, all Barbie’s vehicles are open-topped convertibles. They’re usually two-seater affairs and come in an eye-searing hot pink.

Fear on Wheels aka Christine 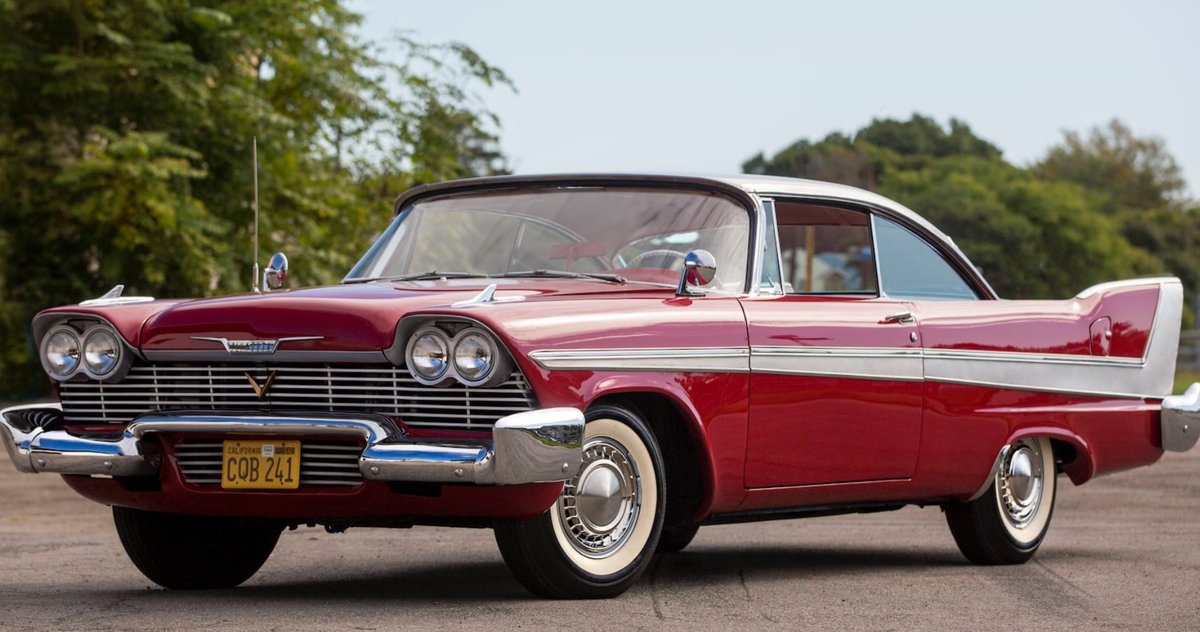 The “Supernatural” car was rarely actually supernatural, but Christine, the titular vehicle from Stephen King’s novel and its 1983 movie adaptation is totally out of this world. But what kind of car was Christine? Definitely an evil one, but also based on a real model. The 1958 Plymouth Fury crosses path poor nerdy Arnie Cunningham in 1978. The bullied teenager takes an immediate liking to the Autumn Red vehicle.

However, Christine is a violently homicidal and jealous car. She’s fear on wheels, and those wheels often end up making gazpacho out of Arnie’s enemies. Eventually the possessed car comes after Arnie’s friends and loved ones, culminating in an epic showdown that leaves the red vehicle in the lurch. But in the movie, an ominous song plays from the crushed cube of metal that Christine the car was reduce to.

But it’s not just the fictional evil car that’s enduring. The book and the film were both so famous that there now exists an International Christine Club, with most members owning a Plymouth Fury just like the one that murders so many people in both pieces of horror fiction.

The “Christine” car was written and played by a 1958 Chrysler Plymouth Fury. The massive vehicle is considered one of the most iconic cars of the 50s for a good reason. It’s four-barrel carburetors were capable of belting out 240 horsepower, far stronger than other V8 engines of the era. Because the production of the movie required multiple dangerous and damaging stunts, there were actually 24 Plymouths that played the “Christine” car. Some were used for on-camera work while others were scrapped for parts to replace damaged components on the on-camera vehicles.

The “Christine” car was monster in the book and movie. The possessed car would have chased down the “Supernatural” car. Barring some form of clever intervention by the Winchesters, it would have reduced the Chevvy Impala to flaming wreckage. The car could regenerate from being set on fire, rammed by a truck and even crushed into a cube. A regular automobile, she most definitely is not.

Fictional vehicles may start in the realm of pop culture, but their beauty and power often inspire real motorists and automobile enthusiasts. Learning more about the car in “Supernatural” or Starsky and Hutch’s car could be your gateway to learning more about car maintenance and modification in general. 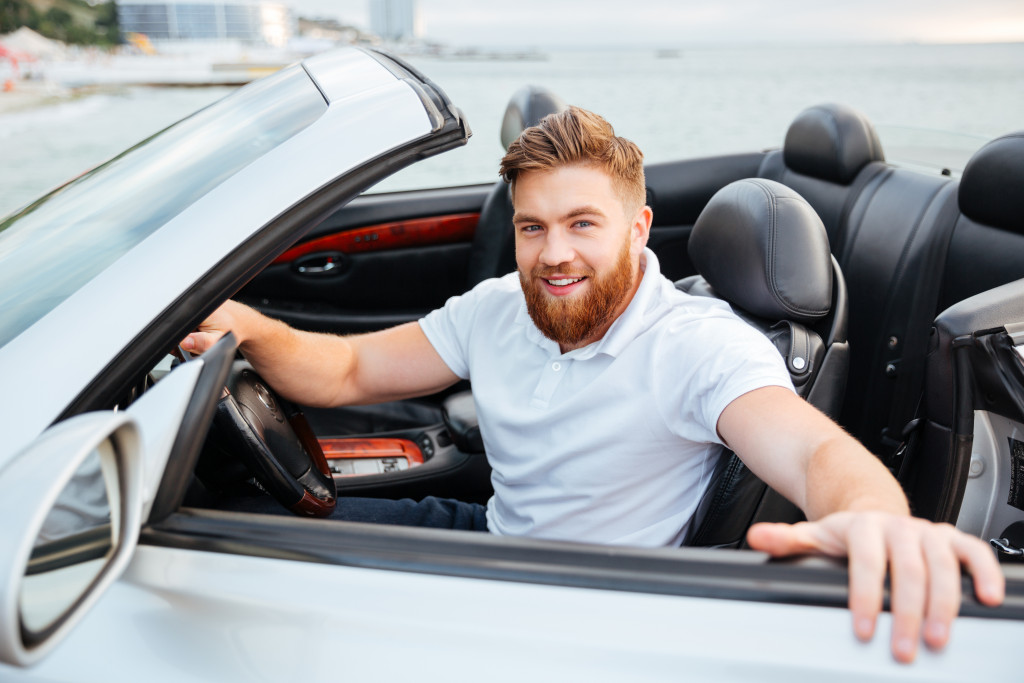